You’ve probably heard of a married couple who has the same name. Patrick and Patricia, but they both go by Pat. Aaron and Erin. Jessie and Jesse. Kelly and Kellie. Corey and Kori. Just to name a few. It seems pretty cute when you first think about it. You both have the same name. You might even have some similar interests. But is it possible to have too much in common to the point of it being creepy? Maybe. It was for me. In the spirit of weird coincidences, I’ll go a bit Rod Serling or even Hitchcockian on you guys. What you are about to hear is coincidence to the nth degree. The following is a tale of two individuals whose paths crossed in a drive by Nerf shooting. Little did the assailant know, but the shot that was taken made a short pass through the Twilight Zone.

The Summer of 2017 was underway. The sun wasn’t too hot. It was hot enough that people didn’t want to be outside in the middle of the day, but it was cool enough that people would start emerging around 4:30 or 5:00 in the afternoon. We had been working all day. We were glorified handymen fixing broken shelves, drawers, doors, and cabinets in married and student housing complexes. After a rather fruitless year of school, the three of us were hoping the Summer would bring with it prospects of dating. It had been a long and tedious year indeed. Each of us had had lousy experiences dating and we were ready for something better to come over the horizon.

The three of us were sitting in an old blue GMC pickup truck. I was sitting between the driver and the passenger.The work day was coming to a close and one my buddies had a “great” plan.  He brought a Nerf pistol with him to work and as we drove around in the truck we were using he said, “Hey, why don’t we take two bullets each and write our first name and our phone number and the words ‘text me/call me’ on them. We’ll roll down the window when we see a cute girl and we’ll spin the barrel and shoot our numbers at them.” Inspired. I had my reservations. First of all, I didn’t think shooting a nerf gun would be a smart thing to do on a college campus. Second, I had just spent the last eight or so months getting rejected by every girl I asked out. So, I wasn’t excited nor motivated to engaged in anonymous number shooting. I was reluctant to join, but I succumbed at the last second. I wrote “JACE” and my number and the words “Text me” on two of the nerf bullets. I gave them to the designated gunslinger and prayed that my number would not get shot out.

During a stop in traffic, the passenger called out to us saying that he saw someone to shoot, so he spun the barrel and shot. The bullet hit near her feet. We didn’t get a really good look at who we shot. He yelled out the window, “Pick it up! It’s for you!”

We drove away. If you’ve ever seen a butcher slapping and punching a piece of meat, you will know exactly how my heart sounded as it bounced and floundered against my ribcage. Sweat was forming on my forehead. My breath was getting shorter and the only words that went through my head were, “Please! Not my bullet!” The passenger checked the barrel to see whose bullet had been propelled at the unknown female pedestrian.

Passenger and Driver: [grins form on their faces, very much like the Grinch from the 1966 adaptation of Dr. Suess’ How the Grinch Stole Christmas]

I couldn’t believe it. I felt like I had been shot. I held my anxiety-laden heart and tried to catch my breath. Maybe she left it. Maybe she picked it up and threw it away. My mind went over every scenario hoping that she didn’t pick it up. Literally thirty seconds later, I feel my phone vibrate in my tan corduroy pants. All the blood drains from my face. I hope this is my mom telling me that she loves me. I can’t take a text from this phantom female. Slowly I pull the iPhone 5 SE from my mended pocket. The number isn’t one that I have saved. The conversation goes as follows: 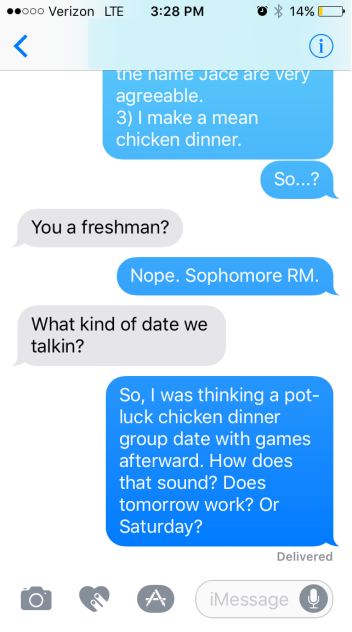 So, that happened. I felt pretty good about myself. I was able to secure a date with a girl who got shot by a nerf bullet with my name and number on it who oddly enough had the same name or at least went by the same name as I did. So, we set the the chicken date up for the next weekend because it was already Friday. I continued to text her and get to know her better. In addition to having the same name, we had also served as missionaries in the Philippines, the only difference is that she served in Cebu (speaking Cebuano) and I served in Luzon (speaking Tagalog). Even though we didn’t speak the same language, it was something beyond the name that we had in common. To make things even trippier, I found out that she had ten people in her family, just like me and that we were both number seven of ten.

As I thought about it, I consulted with my older sister, my go-to dating guru. I asked her in complete sincerity what she thought about this whole situation. She said that she had a friend named Corey who married a girl named Kori and they both had the same last name. The girl was “lucky enough” to not have to change her last name. This just made things weirder. As we talked about it, I realized that as much as I wanted to find a girl with similar interests as mine, I wasn’t sure if these similarities should include name, number in the family, and the country that we served our missions in.

I felt really weird about it, but I still went through with the date. I cooked a classic Filipino dish called chicken adobo. I brought a lot of rice because you can’t have too much rice with Filipino food. My two comrades who got me into this date with my doppelganger had similarly asked girls out so that I wouldn’t be alone on a date with myself. So, the date went well. The chicken dinner was great. Everything went swimmingly. We even played some Quiplash. My name was “the other Jace” and her name was “the real Jace.” It was kind of cute. The date ended and I took her home. I enjoyed the date, but I really didn’t see anything happening. Honestly I couldn’t get past the thought of kissing a girl with my name because I would be able to say that I kissed myself. It was a little too much for me. Just my luck, the next day, she texted me and said that she just wanted to be friends. I felt a lot of relief. I came to understand through taking myself out on a date that similarities are important, but we shouldn’t get hung up on finding someone exactly like us. If you found an exact copy of you, you would most likely go crazy because you’d be talking to yourself all the time. It’s more about being yourself and feeling comfortable in your own skin than it is finding the the perfect person. Let’s face it. Nobody is perfect. You’re not perfect. I’m not perfect. So, how can we expect to find the perfect person if we focus on finding people who are exactly like us? Each of us is unique and that’s the beauty of dating and courtship and life! Even though we may have similarities, it’s the differences that bring us together and make us better.

If you’re still not convinced that this is weird, I cordially invite you to watch this video. It’s the “MeHarmony” skit from SNL a few years back. Enjoy!

Just a regular dude who likes to read, write, think, and sleep. Not necessarily in that order. View all posts by meinjace